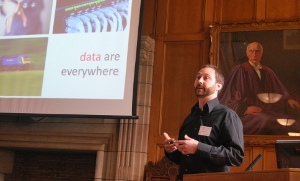 Beginning Fall 2015, I will be Assistant Professor in the Geography Department of the University of Colorado at Boulder where I will focus on spatial-temporal analysis and data-intensive modeling of dynamic geographical processes. Prior to joining the faculty at Colorado I was Associate Director of the Center for Advanced Research of Spatial Information (CARSI) and Assistant Professor of GIScience at Hunter College of the City University of New York (CUNY). In 2012, I held a postdoctoral position at the University of St Andrews in Scotland, and in 2011 I completed a PhD funded by the Irish Social Sciences Platform (ISSP) and the Social Sciences and Humanities Research Council (SSHRC) of Canada at the National Center for Geocomputation (NCG) at the University of Maynooth (formerly National University of Ireland Maynooth) in Ireland. Both my undergraduate and Masters were completed in the Geography Department at the University of Victoria, in B.C. Canada (my hometown!).

My current and future research interests are ultimately concerned with modelling and understanding spatial processes. My work tends to fall under the general banner of ‘computational GIScience’ and encompasses work on networks, transportation, big-data, snow/water processes, and geospatial algorithms. I am as much interested in theories of interactions of human and environmental processes as I am in the methods and models designed to characterize them. As part of my long-term research goals, I continue to incorporate theories of spatial interaction, time-geography, and GIScience into my work on complex systems and dynamics.

My primary interest is in flow and movement data associated with underlying networks within human and natural environments. Spatial models are my primary means of quantitatively characterizing urban processes, and are used to explore data at a range of spatial and temporal resolutions. I also have a keen interest in developing new approaches to solving geographical problems by fostering expanded use of ideas and methods from outside geography and GIScience (such as data-streams and computer graphics). Additionally, I aim to promote the use of spatial analysis methods in data-intensive research to help explore the complex hierarchies and interactions within, across, and between human and natural systems. 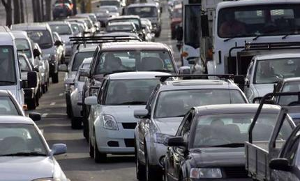 One of the most promising approaches to mitigating land-use and transportation problems is continued research on urban commuting. Commuting is essential to many individuals, allowing them to participate in the labour market and earn a living to meet their essential needs. As such, a better understanding of the determinants of commuting will ultimately lead to a better understanding of the complexities of employment, housing, and the many spatial processes underlying commuting. However, in order to understand the commuting process, it is important to examine the milieu within which commuting takes place: the local labour market (LLM). In my PhD research, the interplay between commuting and LLMs is explored through the use of regionalization techniques and spatial interaction models. I try to show that LLM characteristics play a significant role in intra-regional commuting patterns and that a failure to account for LLM conditions may seriously hinder the applicability of models of commuting. Specifically, I suggest that there are many different LLMs across Ireland and that these LLMs characterize the commuting patterns of population sub-groups. By incorporating these LLMs into models of commuting, I show that in addition to distance and working population size, the spatial structure of origins and destinations and a number of non-spatial attributes such as unemployment, housing density, and education, all significantly affect commuting flows. Furthermore, the distance decay component of these models can be shown to capture a combination of geographical distance and regional differentiation due to LLM boundaries, leading to ‘functional’ distance decay. This concept of functional distance decay is a key finding of my research, and, indicates that in addition to the configuration of origins and destinations, distance decay is also dependent on the spatial structure of LLMs, or more generally, the totality of surrounding conditions within which spatial interaction takes place. This research is funded in part by the ISSP, StratAG, and SSHRC, and is being completed under the supervision of Prof. Stewart Fotheringham. 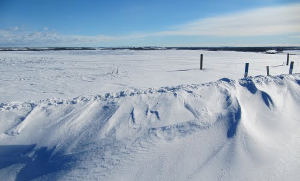 My MSc research focused primarily on examining the spatial-temporal characteristics of snow water equivalence (SWE) in Canada, and comparing these characteristics to known or hypothesized climate and ecological processes. The spatial and temporal distribution of terrestrial snow cover has implications for many ecological processes, such as local snowmelt release, local and global atmospheric circulation, as well as climate, and hydrological cycles. The sensitivity of terrestrial snow cover and SWE to atmospheric conditions and overlying air temperatures also makes snow cover a useful indicator of climate change. Thus, examining the spatial distribution of terrestrial snow cover and SWE over time aides in understanding current and future trends in changing climate conditions. Our research links the spatial-temporal interactions of SWE to underlying land-cover characteristics, as well as generates relevant temporal characteristics from SWE time-series’ in order to explain the dominant SWE regimes across Canada. In addition to its broad implications for climate change research in general, this research also has implications for use in a national biodiversity monitory system for Canada, driven by remote sensing of multiple indicators of biodiversity. These indicators include productivity, disturbance, topography, and land-cover, of which terrestrial snow cover and SWE play an integral part.